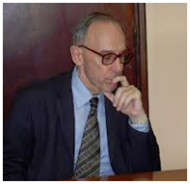 Born in 1938 (age 72). After his studies in law, economics and political science, he was admitted to the ENA (December 1961), which he did not join on his return from Algeria and Germany: he gave up senior civil service and joined the Society of Jesus (Jesuit) in 1963 – where he continued his training until 1972. In 1997, he was awarded a doctorate of State and Church in Strasbourg, in theology and on the basis of works collected on the theme Problems of Society, Problems of the Church at the End of the 20th Century (or: Faith by Approximation).

In Paris (1975-1989): co-directs the review “Cahiers de l’actualité religieuse et sociale” and an Institute of Social Studies at the Catholic University of Paris which he transforms into a fully-fledged Faculty of Economic and Social Sciences. He receives more and more African students there, which gives him the idea of suggesting to the Society of Jesus that it should create a similar higher education of excellence in Black Africa – on the grounds that the future of Africa is not in Europe, and that it is necessary to ensure quality higher education in Africa itself. In 1985, he received from Father General the mission to work there himself.

In Yaoundé, Cameroon (1989-2002): creates, with the Catholic episcopate of the region, the Catholic University of Central Africa (UCAC) with the agreement of Pope John Paul II and President Paul Biya, and the support of several financial partners (Catholic Church, France, European Union, private foundations) and universities (including Bordeaux IV). Its Faculty of Social Sciences and Management (entrusted to the Jesuits), its School of Nursing (Yaoundé) and its Institute of Sciences and Techniques of Central Africa (Pointe-Noire and Douala) make it today a university reference in Africa and in the whole university community (vg. the Institute of Political Studies of Paris).

In Abidjan, Ivory Coast (since 7 October 2002): is entrusted with the re-founding of the African Institute for Economic and Social Development (INADES) created in 1962 by the Jesuits. In the circumstances of crisis that the country is experiencing, this Institute is renamed Centre for Research and Action for Peace (CERAP) and becomes a centre for training and publications (including “Debates – Courrier d’Afrique de l’Ouest”). Its Institute of Dignity and Human Rights (IDDH) was officially recognized in October 2005 as a private Ivorian institution of higher education offering continuing education, three DESS (in 18 months) in human rights, conflict management and sustainable development, and (since 2008), as the School of Moral and Political Sciences of West Africa (ESMPAO), a master’s degree (in 2 years) in Ethics and Governance. Member of the French-speaking University Agency.

In Mauritius: contributes, since June 2009, to the creation of a university structure, the Institut Cardinal Jean Margeot,

Author notably of a ‘Social Discourse of the Catholic Church’ published in 1984 (re-edited and expanded, 5th edition 2009).

Presentation of the insignia of the Legion of Honour to the Reverend Father Denis Maugenest on October 1, 2010.

By Jean-Marc Simon, Ambassador of France to Côte d’Ivoire

We are gathered here tonight for a happy occasion as we honour Father Denis Maugenest, Director General of CERAP.

You are a child from the 16th arrondissement of Paris where you were born and raised.

In 1955, at the age of 17, you obtained your “philosophy” baccalaureate after a brilliant education at the Lycée Saint Louis de Gonzague, sometimes also known as the Franklin, in reference to the street where it is located. A college of Ignatian tradition, as it should have been, it happens to be the last establishment opened in Paris by the Jesuits in 1894. A place of education where the search for personal excellence is emphasized.

The Good Fathers will deplore your indiscipline, a sign of a free and mature spirit, but they will finally be indulgent towards a student who collects first prizes!

But there are few real Parisians and you actually come from an old Bourbonnais family whose fame dates back to the 16th century.

One of your ancestors, a deputy from the Allier after Thermidor, supported Bonaparte le 18 Brumaire at the Council of Five Hundred. The Place François Maugenest in Montluçon perpetuates the memory of this event.

One of your great-uncles was a priest and a freemason, a contradiction which seems malicious to you more than it shocks you because you know that the antinomy is only apparent between masonry and Christianity which share some values and draw common sources in the Old Testament and the Gospel of John.

These family illustrations, of which you are legitimately proud, a father to whom the sufferings endured during the two world wars have conferred a certain philosophy of life, and finally a demanding and affectionate mother whom you will lose too soon, have shaped your intelligence and character.

After Saint-Louis de Gonzague, you attended the Faculty of Law and Economics, then the Institute of Political Studies in Paris. At the age of 21 you obtain a Master’s degree in Economics and at 22 you obtain a Diploma in Political Science.

On the strength of these successes, you naturally prepared for the entrance exam to the prestigious Ecole Nationale d’Administration, which you were admitted to at the age of 23 in December 1961.

Compulsory military service then led you as an officer cadet to the 4th Moroccan Spahis in Cherchell, Algeria, then to Germany within the French occupying forces.

When you returned to Paris to complete your schooling on rue des Saint Pères alongside fellow students such as Lionel Jospin and Ernest-Antoine Seillière, a major event called into question a career plan that was shaping up to be brilliant. Like Claudel at Notre-Dame during the Christmas Vespers of 1886, God imposes Himself on you.

No doubt the journey has been longer, but you make a choice and you stick to it.

You leave the National School of Administration for the novitiate of the Society of Jesus.

Your mother, who had legitimate ambitions for her only son, is dismayed; your father resigns himself to it.

By leaving the rue des Saints Pères, which is nevertheless a singular step, you are not abandoning your studies far from there. On the contrary, you are entering it for life!

After the novitiate in Reims, you continue your studies of philosophy at the Château des Fontaines, a beautiful estate occupied by the Jesuits at the gates of Chantilly, whose remarkable library was known to all researchers and scholars. Then it will be the preparation for the licentiate in theology in Lyon from 1968 to 1971 until your ordination to the priesthood.

A priest at 33 years of age, you then felt a need for action and you were not going to lack it in the Champagne region where you were going to devote yourself to the most deprived and the excluded. You will be a prison chaplain, a member of the commission for the enforcement of sentences and you will then participate in the foundation of the “Movement for Social Reinsertion”.

In 1976, your university vocation was affirmed. At the Institut Catholique de Paris, you transformed the Institute of Social Sciences into a Faculty in its own right and became its dean.

You worked under the benevolent authority of the Rector, Monsignor Paul Poupard, who became Cardinal and Minister of Culture of the Church under the pontificate of John Paul II.

During this period, you were Assistant Director of the “Cahiers de l’Actualité Religieuse et Sociale” and you participated, from Paris, in the creation of the Catholic University of Central Africa. Your African vocation took root at this time.

And in 1989, you joined the Catholic Institute of Yaoundé, of which you quickly became vice-rector. You will spend thirteen years there, during which you will find time to complete your thesis and obtain a Doctorate in Theology from the University of Strasbourg.

These years, during which you had to face so many material and moral difficulties to carry out your project, were crowned with success but also with deep disappointments. Attached as you are to the principle of the freedom of the University, you are in opposition to the local Catholic hierarchy, which holds it against you and excluded you from John Paul II’s visit to Yaoundé in 1995.

This will be a real penance for you, no doubt a consequence of that rebellious spirit which the Franklin Jesuits had already detected forty years earlier but which they had refused to sanction!

This conflict led you to leave Cameroon in 2002 where you had given so much. Your Superior then designated you for the Ivory Coast where you were to take charge of the African Institute for Economic and Social Development, INADES.

You arrive in Abidjan at the worst possible moment, three weeks after the outbreak of the rebellion of September 19!

You were wondering what your action was going to be in this country in the process of being dismantled. My predecessor didn’t encourage you much then, but you will hold out and you will be able to take up all the challenges.

You are going to transform INADES into a Centre for Research and Action for Peace. Current events demanded it.

Thus was born CERAP where you will open an important publishing activity in 2003 and the following year an Institute of Dignity and Human Rights.

For you, man has always been at the centre of everything.

Today, CERAP is an institution of higher education of very high quality, recognized by the State and renowned well beyond the borders of Côte d’Ivoire, throughout the French-speaking world.

More than 150 students can already prepare three postgraduate degrees (DESS) on human rights, conflict management, economic ethics and sustainable development. A genuine private political science institute for West Africa, it is set to develop further and will be able to count on the intellectual and financial support of French cooperation.

This remarkable academic activity, which required courage, determination and voluntarism, is today an irreplaceable success which, in addition to the Society of Jesus, honours Africa and the Francophonie.

I will not fail to recall also the very numerous publications that you have promoted and very often authored, Father Maugenest, on very diverse subjects, such as Marxism, secularism, violence, the social commitment of the Church…

France can be proud of the action taken by one of its sons to spread its principles and thought.

That is why, after appointing you to the rank of Chevalier of the Legion of Honour in 1997, the French Government decided to promote you to the rank of Officer, a distinction which I shall now have the honour of bestowing upon you.

In the name of the President of the Republic and by virtue of the powers vested in us, we make you OFFICER of the Legion of Honour”.