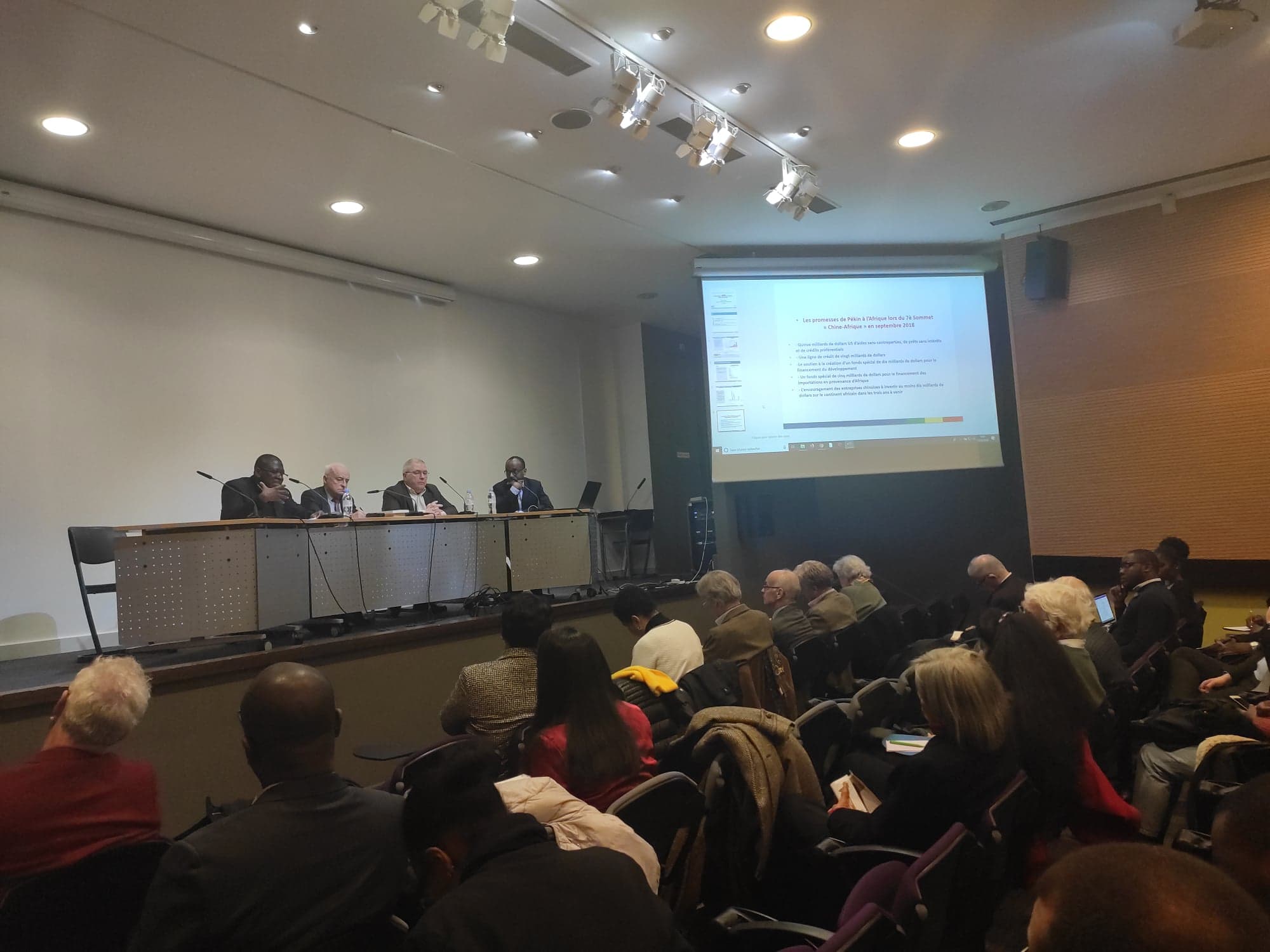 On February 12, 2020, the Institut Afrique Monde (IAM) organized a conference at the Centre Sèvres on "China-Africa: What Perceptions? What realities? What perspectives?".

Under the aegis of Mrs Denise Houphouët-Boigny, President of the IAM, this event, which brought together 250 participants, was led by Professor Kako Nubukpo, economist and politician, and Professor Thierry Pairault, sinologist and emeritus research director at the CNRS.

The moderator was Mr Pierre Papon, former Director General of the CNRS.

After recalling that the concept of the "Silk Road" is a very old one, Thierry Pairault underlined the frequent errors of appreciation that one makes when discussing China's relations with the rest of the world. First of all, far from being monolithic, China is plural: it is shaped internally by a plurality of strategies and composed of a plurality of actors and opinions. Secondly, and this is also underlined by Kako Nubukpo, China is accused, quite wrongly, of monopolizing agricultural land in Africa. Finally, it is erroneous to estimate that China is investing considerably in Africa (only US$5.4 billion in 2018), while it is mainly involved in project financing (around US$50 billion in turnkey contracts delivered by China in 2018).

In its relations with Africa, what distinguishes China is that it has an adjusted and punchy narrative, whereas the speakers believe that France - and more broadly Europe - would now be quite short of it vis-à-vis Africa .

This being the case, does Africa have a relevant narrative? It should certainly imperatively set up think-tanks to provide it with the basis for reflection and decision-making that it currently lacks, preventing it from having its own vision of the world and from being fully in control of its own destiny.

The latter provision would be one of the keys to Africa's independence of action and progress. In its relations with China (but also with the rest of the world...), it would provide it with a solid conceptual basis for a useful confrontation of points of view and the establishment of balanced bases for exchanges, ensuring harmonious and profitable development for each of the parties. Africa would then be in a position to protect itself from the influence - possibly "contrary" - of the rest of the world, to have a firm foreign policy and to take up the many challenges that arise: protection of the environment and deployment of a nourishing agriculture in this period of global warming, proactive management of non-renewable resources, appropriate investments in public health and education, scientific cooperation and industrial policy, establishment of good governance ensuring respect for human rights.

The IAM, for its part, will continue to play the role of think tank, the importance of which Kako Nubukpo stressed for Africa, in order to help it imagine its future in relation to the other regions of the world, particularly Asia and Europe.