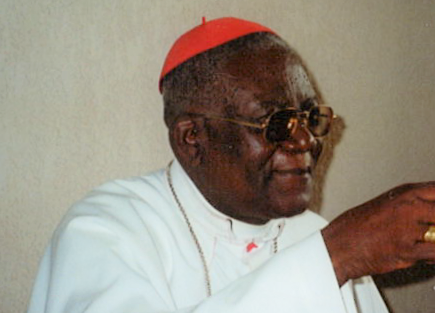 It was on the occasion of the solemn opening of the Catholic University of Central Africa (UCAC), which he presided over in his capacity as Grand Chancellor of the University, that I met Cardinal TUMI in November 2001 and 2002. During one of his talks to the students, I noted his message to them:

It was during the traditional lunch that followed the ceremony that we were able to talk. This impressive pastor, not only by his stature, became simple, friendly and direct in his exchanges with each other. He was outspoken and at the same time empathetic to his interlocutors, attentive to what they were saying. He talked about serious things with a smile!

I also met him on the occasion of the celebration of the 10th anniversary of the UCAC. He was presiding over a “pontifical” mass surrounded by 5 bishops and archbishops, including the one in charge of Catholic universities who had come especially from Rome. I remember his pedagogical homily on the “Last Judgement”. He was a man who expressed his faith with vigour and conviction.

He received us with Porticus in Douala for a more social and political vision of Cameroon. Underneath his warm exterior, he was realistic and rather severe on the global situation of the country in its different political, economic and social aspects.

He did not hesitate to criticise the presidential power for decisions that did not respect human rights.  His last commitment during the recent events between Anglophones and Francophones undoubtedly allowed the situation not to degenerate into more deadly conflicts.

He was listened to and respected, and no doubt also feared a little by those in power, without giving in to his ideas as a man, a Christian, the head of a Church and a man committed to the political life of his country.

His influence went beyond the borders of his country; he was a great witness for Africa.

We can only hope that his successor, Bishop Kléda, whom I met and appreciated, will be able to continue his work.