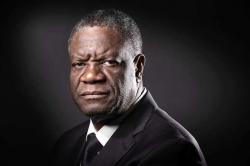 “THE MAN WHO REPAIRS WOMEN” IN THE DEMOCRATIC REPUBLIC OF THE CONGO: A LOOK BACK AT THE STRUGGLE OF DR. DENIS MUKWEGE, NOBEL PEACE PRIZE 2018

In Africa, women are the main victims of armed conflicts since they are, in particular, the targets of rape; in recent decades, many cases of rape have been recorded in all major armed conflicts in Africa, particularly in Liberia, Sierra Leone, Côte d’Ivoire, Rwanda, Central African Republic, etc.). However, the situation that has attracted the most attention from the international community is that of the Democratic Republic of Congo (DRC) not only because of its sustainability, but also and above all because of its hideous character, which is rightly considered by the United Nations and several independent observers as a real “weapon of war”[1].

The “DRC” is a huge country[2] that occupies a strategic position in Central Africa. With nearly 80 million inhabitants divided into more than 500 ethnic groups, the DRC is culturally very heterogeneous1. Known for its abundant rare natural resources, the country is bordered to the west by the Republic of Congo (Congo-Brazzaville), to the north by the Central African Republic and Southern Sudan, to the east by Uganda, Rwanda, Burundi and Tanzania and to the south by Angola and Zambia2.

The history of the DRC is complex and, since its independence from the Belgian monarchy in 1960, the country has been the scene of cyclical wars characterized by large-scale massacres and countless internally displaced persons. The “Second Congo War” (1998 – 2003) was a particularly bloody conflict involving up to seven African countries and countless rebel groups with diverse claims. Against the backdrop of the Rwandan genocide, this conflict with its multidimensional causes (ethnic, political and economic) which has deeply weakened the DRC and whose current conflicts are still closely linked. In 2002, thanks to the intervention of the United Nations Organization Mission in the Democratic Republic of Congo (MONUC, now MONUSCO) and the bilateral agreements signed between the DRC and Rwanda on the one hand and between the DRC and Uganda on the other, the conflict officially ended.

Today, although the country has stabilized, eastern DRC is still subject to waves of repeated conflicts, humanitarian crises and serious human rights violations. Congolese and foreign rebel groups, taking advantage of the lack of authority and general insecurity, illegally exploit the DRC’s natural resources to finance their activities. In addition, inter-community clashes are recurrent and increase tensions. In this difficult context, the army and the national police, lacking the necessary technical or financial resources, are unable to protect the civilian population. The UN Mission (MONUSCO) is still present in the DRC and is trying to carry out its mandate to protect the population; however, attacks are still taking place in this part of the Democratic Republic of Congo and women are raped every day.

In 2010, the UN Special Envoy for Violence against Women and Children in Conflict, Margot Wallström, denounced the systematic and widespread nature of rape in the DRC. In that year, between 30 July and 2 August, 154 civilians were raped by rebels in 13 different villages[3]. Eight years later, the situation is rather mixed and, although some measures have been taken by the national authorities, the number of acts of sexual violence remains high.

A multiplicity of factors and types of sexual violence

This high number of sexual violence committed by rebels and civilians can be explained by several reasons.

In the context of armed conflicts, as is the case in the east of the Democratic Republic of Congo, several forms of sexual violence can be distinguished:

In some cases, rape is a deliberate strategy to corrupt community ties. It constitutes a form of attack against the enemy and characterizes the conquest and degradation of women or captured combatants. And some rebel groups in the east of the Democratic Republic of Congo are making it a modus operandi.

Sexual violence has profound short- and long-term repercussions on the physical health of victims. They can cause bodily injuries ranging from superficial bruises to permanent disability, sexual and reproductive health problems and sexually transmitted diseases or unwanted pregnancies.

The consequences for mental health are equally serious and can have lasting negative effects, including depression, suicide attempts and post-traumatic stress disorder. In addition, such acts compromise the social well-being of victims, who are banished from society. In addition to the consequences for the victim himself, rape also has an impact on the well-being of the family and the community. Rape produces feelings of humiliation and shame not only among the raped woman but also in all those around her. Socially stigmatized, these women and their families encounter difficulties in the relationships they establish with members of the group as a whole, as Pascaline, a woman raped by armed men under cover of anonymity, testifies:

“We lived well with my husband. I was in a small business[5],” she explained to the International Committee of the Red Cross (ICRC). One evening, on the way home, Pascaline was raped by the armed men. They stole everything she had, “I went home around 9:00 in the morning. My husband was there with the children. He asked me where I had spent the night. I tried to explain to him what happened, but he wouldn’t listen to me. He told me to leave. He didn’t want to see me anymore. I felt overwhelmed. I didn’t understand what was happening to me. I didn’t want to. I wanted to die. I didn’t understand… and I was even kicked out of my home. You can see what a misfortune it was[6]. “she added with tears in her eyes.

Little known by a large international public until he won the Nobel Peace Prize, Dr Denis Mukwege is nevertheless a great fighter who fights against sexual violence against women through lobbying international organizations and human rights NGOs, and for 20 years, he has been repairing raped women in the eastern Democratic Republic of Congo. Born on 1 March 1955 in Bukavu, in what was then the Belgian Congo, Denis Mukwege was the third of nine children.

“He made the choice to return to his country, and to stay there in the darkest hours.”

After studying medicine in neighbouring Burundi, he returned home to work at Lemera Hospital in the Middle Plateaux of South Kivu (eastern Democratic Republic of Congo). He then discovered the suffering of women who, for lack of appropriate care, were regularly victims of serious postpartum genital lesions, condemning them to permanent incontinence. After specialising in gynaecology and obstetrics in France, he returned to Lemera in 1989 to head the gynaecological department. When the first Congo war broke out in 1996, the hospital was totally devastated.

In 1999, Dr. Mukwege established Panzi Hospital. Designed to enable women to give birth properly, the centre quickly became a rape clinic as the eastern part of the Democratic Republic of Congo sank into the horror of the Second Congo War (1998-2003). He operates relentlessly on women, girls, sometimes even babies. In addition to medical care, it organizes psychological and legal care, as well as social reintegration assistance.

At 63 years of age, married and father of five children, Dr. Mukwege could have stayed in France after his studies in Angers (central west). He made the choice to return to his country, and to stay there in the darkest hours. Deeply believing, this son of a Pentecostal pastor “lives his values in everything he does”, and above all, he “never gives up”, says a European woman who worked with him for several years in Panzi.

A doctor and scientist, he is committed as an activist to improve and dignify the lives of his patients. Through his publications, he demonstrates the need for the rule of law to reduce impunity and improve health policy, which is essential for the proper care of his patients. It puts the spotlight on a deliberately forgotten genocide. He himself in the sights, he narrowly escaped an attempted attack one evening in October 2012. After a short exile in Europe, he returned to Bukavu in January 2013 where he currently lives under the permanent protection of soldiers of the United Nations Mission in Congo (Monusco).

A newly mediatized personality, committed to human rights and against oppression

He became the world’s leading specialist in repairing trauma to the female genital tract and developed new surgical techniques to improve operations. His scientific research led to a doctoral thesis presented at the Université Libre de Bruxelles in October 2015. Many of its operations are becoming world firsts. He is now Professor Mukwege and a man of science who has been awarded numerous academic prizes.

He is notably named Doctor honoris causa of the Catholic University of Liège in Belgium and of the prestigious Harvard University. Already awarded the Sakharov Prize in Europe (2014), the United States and Asia for his work, he is ranked by Le Time magazine among the 100 most influential personalities in the world.

He lends his image to a global campaign urging large multinationals to control their supply chains to ensure that they do not buy “blood minerals”, which contribute to fuelling violence in eastern Congo. Her fight for human rights, against injustice, impunity and silence has earned her the prestigious 2018 Nobel Peace Prize alongside the young Yazidi Nadia Murad.

This Congolese hero of the 21st century has decided to fight his fight to the end. But since 2015, as the DRC has been plunged into a political crisis full of violence, “The Man Who Repairs Women”, as described in a documentary on his struggle, has repeatedly denounced “the climate of oppression and the narrowing of the space of fundamental freedoms” in his country. The new Nobel Prize thus encouraged the Congolese at the end of June “to fight peacefully” against the regime of President Joseph Kabila rather than to bet on the elections scheduled for 23 December “which we know in advance will be falsified”[7].

The statements that do not help the Kinshasa regime during this pre-electoral period since October 5, 2018, when it received a hundred congratulatory messages from around the world following its Nobel Peace Prize, Dr. Denis Mukwege has not yet received any official message of congratulations from the Presidency of the Republic of his country, no meeting with the Head of State has been scheduled until then. The only small reaction was that of the government spokesman, who, contacted by telephone by the local media after a few minutes of the award announcement, congratulated Dr. Mukwege.

It is almost impossible to provide accurate and precise figures on cases of sexual violence in the Democratic Republic of Congo. However, all humanitarian organizations, both national and international, agree that there are about 100,000 women raped in eastern Democratic Republic of Congo, and the figures are probably lowered: women who die as a result of such violence, for example, are not counted. In addition, a significant proportion of victims remain silent. This must not be forgotten, however, since the taboo on the issue is particularly prevalent, sexual violence also affects men, who only exceptionally have the courage to talk about it, and only when the physiological repercussions are disabling.

In view of this situation, it is important for the Congolese State to monitor its programmes and laws. It must address the root causes, including the persistence of insecurity in rural areas. It must also set up a fund to enable victims to obtain compensation when the perpetrators are sometimes destitute. The community must also denounce sexual violence. As for the magistrates, they must punish the executioners in accordance with the law. As sexual violence is a threat to international peace and security, the international community must also take responsibility for putting an end to this practice, which continues to claim victims almost every day.

[7] Denis Mukwege, the man who repairs women and denounces the power in the DRC (french)