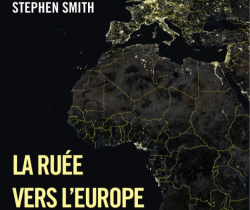 This 17th book by Stephen Smith is no longer that of the journalist he was once in France for Libération and Le Monde, for which he wrote columns on Africa. It is here that the American university professor at Duke expresses himself as a philosopher of human geography and a history “that is on the move but whose steps are slow“. He added that since demographic changes are only occurring at a pace too slow to be observed, they are only recognized after the fact.

The author therefore refrains from starting from some ideal a priori, and only proposes to “inform the elements of the debate and provide a factual basis on which everyone can build their political platform… and to assess the importance of the migratory reservoir that Africa constitutes and, as far as can be predicted, of what magnitude the flows likely to head towards Europe will be and at what time“.

He will therefore focus on the three scenes defining international migration: the abandonment of the original residential neighbourhood, the test of transforming the fugitive into a tragic or triumphant hero, and the habitability of gradual reintegration in the long term. Today, 510 million Europeans live in the neighbourhood of 1,300 million Africans, but in 35 years’ time this ratio will be in the order of 450 million rather elderly Europeans, alongside some 2,500 million Africans, two thirds of whom will be under 30 years old. Africa’s youthfulness – essentially sub-Saharan – is already and will in the future be an even greater source of stress within African society itself – where the principle of seniority is a fundamental social rule – and in Europe, which is not prepared for the arrival of at least one million migrants per year to stabilize the working population and cover the lives of pensioners.

The debates on the tolerance threshold for each other’s acceptance within the “fortress” of the old continent bear witness to this. As for the’rush’ to Europe,”the starting point of my reasoning is that human geography is of crucial importance for the understanding of contemporary Africa”.

And to stop first on the law of large numbers (chap. 1). The world population decline has already begun, but Africa is an exception in today’s world, and by 2100, out of a global total of 11 billion people, 40% will be African and the world’s youth: the author saw it in Lagos (Nigeria), which already had 15 million inhabitants when the author visited it in 2006, and in all the cities overwhelmed by the exponential urbanization of rural populations, without any demographic governance already being promoted at that time – “a redesign in accordance with natalist habits is a squaring of the circle” (p. 67).

Nevertheless, there are currently commendable political efforts everywhere to promote family planning and modern contraceptive methods that should gradually influence the course of events. With the end of the Cold War and the collapse of the Soviet Union, as well as the genocide in Rwanda in 1994, the American State Department spread the idea that this evolution is the sign of the future Anarchy (The Coming Anarchy): urban slums, empty granaries, coveted lands, expulsion of white farmers in Zimbabwe…

“Youth” is taking shape in Africa in the wake of independent model heads of state, such as Kenyatta in Kenya in the Bantu tradition, Museveni claiming his education in Uganda. Smith also points to the influence of religious currents (Christian-Pentecostal, or neo-Muslim Shebab or boko haram) that make young people dream, disorienting traditional age groups to the point of engaging in civil wars.

Would Africa become Peter Pan’s Island Continent ? But already emerging, Africa is also emerging for unemployed young people as “the archipelago of failed adults, waiting for a full life that refuses to accept them” (p. 106). And admitting that he is tired of the quarrels between Afro-optimists and Afro-pessimists, and without any preconceptions, the author sees States with little institutional capacity surviving on the whole rather well through the practice of granting rights to each other (especially for education). He says he is fascinated by this political alchemy that transmutes incapacity for profit: the less the State is able to act itself, the more it has to offer to external, grateful partners! In the shadow of the warrior king, private companies have a bright future, at the expense of civic-mindedness and authentic democracy!

What then is to be thought of the cascade departure finally leading to Europe ? Migration traditions are very old in Africa; the desertification of the Sahel, the drying up of Lake Chad and ecological warming forecasts encourage them towards national, regional and continental metropolises; living the “life of the whites” makes you dream; and having a minimum financial means (about 2,000 euros) and moreover being able to count on the existence of an African host diaspora in Europe easily do the rest. Migrants generally arrive there with a culture of clandestinity acquired in the trials of the Sahara, Libya and the Mediterranean, “bringing to Europe what Europe has sown to all winds, namely “the evil of the infinite” ” (p. 170). And the author adds: “The worst response that can be given to African migrants is “the policy of pity”.

The stakes are otherwise high in this phase of history where “we are all part of the great repopulation in progress, either as people settling elsewhere or as people receiving foreigners”. If a quarter of the world’s population was European in 1900, by 2050 Europeans, shrinking and graying, will only be 7%. The important thing is not to choose between Good and Evil, but to govern the debate on African immigration in the interest of the City and its citizens without losing the sense of Humanity. The author invites his readers to understand this moment in history with kindness: “Europe, which has poured out its overflowing population throughout the world; would it not be hypocritical if it were to refuse to accept today what it itself practiced yesterday ? He also invites them to be realistic: “The massive migration of Africans to Europe is not in the interest of either the young Africa or the Old Continent“. Their forced union seems inevitable, it is not yet inevitable. A policy of bric-a-brac, made up of the dynamic reception by a generous Eurafrique, the reasonable shame of a fortress Europe, the inevitable mafia abuses on the margins, the possible equally marginal returns to various protectorates, could and should combine the ongoing emergence of the African continent and the survival of the European continent with confidence and reason in the progress of things…