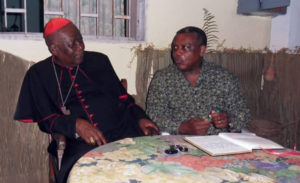 His Eminence Christian, Cardinal WIYGHAN TUMI, Archbishop Emeritus of Douala rests since April 20, 2021 at the Cathedral of St. Peter and St. Paul of the economic capital, in the vault of the Bishops, alongside his four predecessors.

The whole of Cameroon, all regions and denominations, mourned and accompanied the Cardinal to his final resting place, supported by numerous delegations from Africa and elsewhere, to bid farewell to this Prelate who will have left his mark on his time: very moving testimonies on his journey and the actions that marked his life. All agreed on his ardent desire for justice, dialogue, openness, but also for non-compromise. His door was always open and his hands were always outstretched towards his neighbor, to listen, to dialogue and, if necessary, to advise. But he also knew how to be firm, incisive and even vindictive when he realized that human, social and democratic values were being flouted.

I therefore walked with Cardinal TUMI in the years 1989/90 and for almost 15 years. Having attended the first meetings of the creation of the UCAC between the Bishops of Central Africa and the Rectorate, I can affirm that the game was not easy. First of all, because of the somewhat “fussy” look of the Bishops from other Religious Congregations towards the Society of Jesus, in charge of the creation and management of the University. But also because of the complexity of this dossier, which cuts across a multiplicity of fields and requires diverse, specialized and varied skills, far removed from the daily activities of the Bishops.

It is thanks to Cardinal TUMI’s vision, his understanding of contemporary problems and his ability to project himself into the future, that many problems have been solved and misunderstandings dispelled. Gradually the Bishops became aware of the reality of the facts, the figures and the costs, thus moving away from an often angelic and, obviously, off-the-wall approach. The creation of a university is a complex work where prerequisites are combined in terms of plans, architectural design, organization, search for financing and partnerships, development of programs, selection of tenured and part-time teachers, and therefore necessarily the elaboration of a “Business Plan” based on data, especially financial data, forecast.

This was a real cultural earthquake for the bishops who, leaving their own world, had to enter fully into a world, necessarily real, where money also had to be discussed. In 1991, paying a university professor 400,000 CFA francs per month seemed surreal to a bishop who only gave 50,000 CFA francs per month to his priests! To ask the Bishops to honor the school fees of their Seminarians while they were the “Founding Fathers” of the Institution, was a Kafkaesque vision…

Consequently, UCAC cannot thank Cardinal TUMI enough for the time spent in dialogue with his peers and convincing them of the merits of the elements contained in the file, in short, reassuring them of the feasibility of the Project and thus allowing it to go through to completion and for UCAC to become an effective reality: it is today the pride of all in the CEMAC zone, and even beyond: one of the rare operational integrating programs in the Sub-Region.

Thus, what could be more normal than for the Grand Chancellor to address the students at the beginning of the academic year, to remind them of what was expected of them and that beyond purely academic knowledge, ethics and moral values should be added.

One day, Cardinal TUMI told me that Pope John Paul II, very satisfied with UCAC, sent him to Nigeria to give his Nigerian peers the key to this success. When I asked him what he told them, he answered with a smile: “but simply to trust committed and competent lay people, as the Church does not know and cannot do everything”. The Cardinal also went out of his way to ensure that the UCAC would help needy students through scholarships, which Father Maugenest did admirably with the creation of the Saint Augustine Foundation.

Always concerned with the training of youth, he pushed and encouraged his successor at the Archbishopric of Douala, Bishop Samuel KLEDA, to create the SAINT JERÔME CATHOLIC UNIVERSITY, thus opening a university outlet to many young people who could not enter the UCAC because of the limited number of places.

This is the other part of Cardinal TUMI’s life, probably little known to the general public. At the request of ROME, he devoted much of his time to the new generations, concerned as he was with the transmission of knowledge and moral values.

It is also with the same determination that he was involved in the advent and the process of the democratic game in Cameroon, thus causing serious questions from the Government on its real objectives… He also invested himself in the search for peaceful solutions in the crisis known as “Anglophone” which has been bogged down for more than three years in the North-West and South-West Regions of Cameroon “NOSO. Originally a simple corporatist demand by the native lawyers of these regions for the pre-eminence of the French language over the English language, especially in legal documents and texts, this discontent quickly took the form of a feeling of marginalization on the part of our English-speaking compatriots and turned into armed rebellions, in the form of attacks, house and school burnings, and physical eliminations, to which the Defense and Security Forces responded in turn. The political demands became more precise, but diverse: federalism for some, secession for others (with the creation of a state called “AMBAZONIE”) and the maintenance of a unitary state, if not a little Jacobin, for a third camp. On the bangs of these demands, highwaymen have appeared, creating terror and insecurity in the NOSO, against a backdrop of massacres, kidnappings and ransom demands. In the end, the situation is inextricable, with thousands of deaths and the exodus of the population.

Faced with this harsh reality, Cardinal TUMI took up his pilgrim’s staff to help bring back peace to this part of the National Territory. For him, only dialogue could get the country out of this crisis. From then on, as much as he was severe towards the Government for having let the situation rot, he will take the initiative to invite all the stakeholders of the NOSO, thus Anglophones, to organize themselves and to meet around a Round Table. The goal is to agree on their demands and to designate their Representatives to the Great National Dialogue, inclusive and constructive with the Government, in order to finally get out of this impasse, source of bruises for the populations of the NOSO. For various reasons, this preliminary meeting will never take place….

On several occasions, the Cardinal went to the NOSO, his native region, to silence the weapons and invite dialogue: in vain! He was even kidnapped, his captors being convinced that he was taking up the cause of the “Government of Yaoundé”. Before their “Tribunal”, he was invited to clarify his position. Moreover, they asked him to be their defender with the Government. He remained firm in his convictions, preferring dialogue to arms.

At an advanced age, he did not emerge unscathed physically from these trials. He who liked to repeat that he was convinced that he would be a hundred years old, just like his mother who (deceased for a few years), was still sewing without glasses at more than 100 years old… He will not have this opportunity: he will leave us on April 03, 2021 in his 91st year.

In the meantime, he was made a Cardinal by Pope John Paul II in June 1998 with the title of Cardinal-Priest of Santi Martiri dell’Uganda a Poggio Ameno: the first and only Cardinal of Cameroon to date.

Archbishop Emeritus of Douala, God called him back to himself:

An extraordinary destiny which marked a whole era.