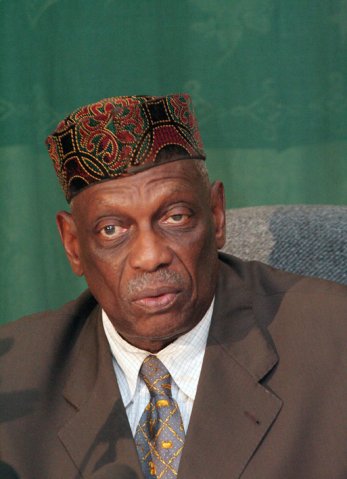 We are deeply saddened to inform you of the death of Professor Albert Tévoédjrè, godfather and founding member of the Africa World Institute, on November 6, 2019 in Porto Novo.

Born in 1929, Albert Tévoédjrè, an emblematic figure of African diplomacy, was the promoter of interreligious dialogue, peace and the fight against inequality in Africa. He was a great academic with a remarkable intelligence that he knew how to put at the service of the common good. Through his major publications, “Africa Revolted”, published in 1958 and “Poverty and People’s Wealth” (1977), he became a major intellectual figure in African thought. In addition, he carried out actions both on Beninese politics and on the international scene. In 1958, he joined the General Union of Dahomey Workers and was subsequently elected General Secretary of the Teachers’ Union, and then, following Benin’s independence, was elected Deputy General Secretary of the Rassemblement Démocratique Dahoméen. In 1998, he was appointed Minister of “Planning, Economic Restructuring and Employment Promotion” in his country. He joined the International Labour Office (ILO) in 1965, where he will serve as Regional Coordinator for Africa and Deputy Assistant Director-General. As a defender of peace and guarantor of dialogue, he was the UN Secretary-General’s Special Representative for Côte d’Ivoire (2003-2005) and Mediator of the Republic of Benin (2006-2013).

As an architect of peace in Africa through his initiatives to live together and his actions within national and international bodies, he has raised the bar as a sponsor of the IAM for the values that our Institute shares. This sharing of values was notably concretized through the participation of IAM in the project “African Initiative on Education for Peace and Development through Interreligious and Intercultural Dialogue” initiated by the Pan-African Centre for Social Foresight – Albert Tévoédjrè Institute (CPPS/IAT) in 2015 in Cotonou.

He will be buried on November 23 in the African House of Peace, the last project concretized by the professor who has a chapel, a mosque and a temple of spirit, symbol of interreligious encounter and living together where Albert Tevoedjrè will rest.

The Institut Afrique Monde extends its deepest condolences to his family and friends.