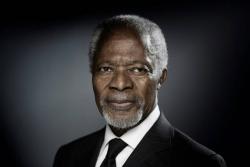 Kofi Annan was exceptional. Here he is promoted to immortality. Everyone will have noticed the sobriety and precision of the Kofi Annan Foundation’s statement announcing the death of the former Secretary General of the United Nations.

“Peacefully”. This word corresponds to a whole life of this brother who amazes the whole world with a life journey that means caring for others, living together and peace among all.

I have had the great privilege of knowing Kofi Annan since 1964 in Addis Ababa when he served as the modest personal assistant to Robert Gardiner, also a Ghanaian, a young companion of N’KRUMAH, who was then Africa’s first great hope at the United Nations and served as Executive Secretary of the Economic Commission for Africa.

Guided by this master, Kofi Annan, already very gifted, patient, methodical and discreet, has endeavoured to serve the United Nations in the most diverse fields while knowing how to choose his fields of involvement.

His studies in England and the United States, his service at the High Commissioner for Refugees, his competence in personnel management quickly made him known as a leader who knew how to take charge of others and make them grow.

One of Kofi Annan’s particularities was to recognize the qualities and admire the skills of a colleague, the value of a friend.

I must point out here his absolute fidelity to all those with whom he has worked and whom he has appreciated. I remember so many recommendations from him for the daughter of a childhood friend, a friend who died years ago and whom he has constantly followed, protected and nurtured.

I have had the privilege of benefiting from his constant trust to work with him on several delicate issues relating to reconciliation in the Democratic Republic of Congo and in particular in Côte d’Ivoire where he chose me to be his Special Representative.

This was at a particularly difficult time and in circumstances that could have set the whole of West Africa on fire.

I thus had the heavy task of initiating one of the first peace operations combining the security of the populations and their development.

This man of temperance and sobriety, of control and independence of judgment, was inhabited only by the necessity of service, the good of the people, the true and the just. And this in family, in society and in the accomplishment of the greatest projects that he initiated and followed with remarkable punctuality. Punctuality was for him a kind of religion that allowed him to master both the many challenges that were unknown to him and how he freed himself.

Towards the end of his second term as UN Secretary General, his country, Ghana, was going through a period of great political confusion. Many of his compatriots had thought of him to become President of the Republic.

The polls were largely in his favour. Everything was in place for its success. He slipped into my ear one day:

“Albert, that kind of job is not for me”

(This kind of work is not for me.)

Instead, he turned his attention to the green revolution, the needs of food for all, peace. And he created a foundation promised to have the greatest impact. He was more comfortable in the public service, in coordinating everyone’s skills and competencies for overall success.

He kept in mind the specific contribution of each collaborator and did not really separate from anyone. To a project manager who had become cumbersome in embarrassing circumstances and from whom it was necessary to take leave, he had this word that can be found verbatim in a famous play by Pierre Corneille (POLYEUCTE):

“I am leaving you with regret, but at last I have to.”

Comforted by many private meetings with this brother of choice, particularly during our exchanges during the summit of consciences in Paris (July 2015), I dare to say that, in my opinion, one of the greatest trophies to offer him would be the publication of an encyclopedia of the many “miracles” that he had operated by thousands of collaborators (from ELISABETH LINDENMAÏER to LAKHDAR BRAHIMI, of SADAKO OGATA, IBRAHIMA FALL, CARLOS LOPES, HEIDI NOUIRA, JEAN ZIEGLER, KENNETH DADZIE or ALLAN DOSS and hundreds of others) by whom he sought what no one could imagine in each of the countries of this universe of great upheavals in Burma, Iraq, Zimbabwe, Kenya, Nubia, Cyrenaica or NICARAGUA.

So much so that we could distinguish this African from being the synthesis in itself of a unique and diverse human nature, a rainbow of essential values that are pedagogy of life and that fully justify this Nobel Prize that we all share with pride.

From the pantheon of light on which it now sits, it will confidently guide our modest and ardent efforts for peace along another path, that of interreligious and intercultural dialogue, producing development projects for the eradication of poverty and the common achievement of a Common Social Minimum. He will be the godfather of the House of Peace, created in Africa in Benin to promote a more fraternal world.